For new development done at Akinox on our Telemedecine platform, we’ve chosen .NET Core as the backend (a blog post will eventually explain why). Our frontend is built using Node.js and React. The database is on SQL Server since it has been that for a long time now.

Recently, we’ve had help from developers who run their development setup on Macs. This was a little troublesome to setup backend development. It involved setting up a Windows VM on VirtualBox, installing Visual Studio 2015, SQL Server and possibly other dependencies to build the legacy application where the database backup and database migrations are currently held. Then, once that was done, network configuration and port forwarding and so on had to be built. This was a long and complicated process which is also heavy on a smaller development machine.

With the recent arrival of MSSQL on Linux, I planned on looking into it. Last week was the final straw when a new developer couldn’t get his frontend to communicate with the backend. I decided to look if there was a docker image for MSSQL. There totally was!

After downloading the huge image with

For those unfamiliar with docker, here’s a quick explanation of each parameter:

Since I mapped a local folder, I simply copied a backup of my current database running in SQL Server to the folder and I was able to use SQL Server Management Studio on my docker instance to restore the backup.

It’s also possible to install sqlcmd directly on the container after attaching to it. Here are instructions on installing it.

Once installed, I had two extra steps before being able to run it.

Here is a screenshot of what it looks like! 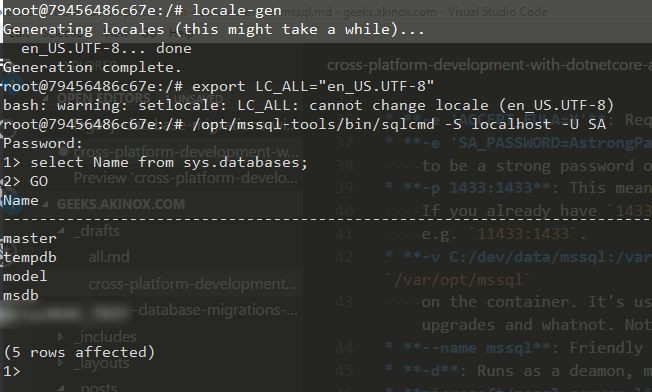 Restoring my backup was a simple

And there you have it! SQL Server in a docker container! This worked much better for our developer on Mac, removing the necessity of a VM!

It’s also practical to make the setup of the application faster and more easily reproducible since all of it can be automated. I’ve changed my setup on my laptop to remove SQL Server entirely since it’s lighter to run docker!

It’s also a step towards full containerization of our app, which would allow much easier deployments and a transition to Cloud Hosting without too much hassle.